Well, firstly its not “Google Chat” but just “Chat”

Chat is a new bet made by google after Allo, Duo in the messaging world. It is  an attempt to replace SMS and compete with Apple’s iMessage and Facebook’s WhatsApp with the help of mobile phone operators.

Chat is not just any other new texting app. Rather it is something that will bring the Android texting experience closer to the iPhone’s iMessage. Google’s Users will not need to download another chat app or set up a new account.

Because Chat is based on a standard called the “Universal Profile for Rich Communication Services. It will automatically be turned on inside Android Messages, the OS’s default app for texting.

What makes it similar to iMessage is that if you are texting somebody who doesn’t have Chat enabled or is not an Android user, your messages will revert back to SMS.

How It All Started – A Brief History of Android Messaging Lets not forget that the history of mobile messaging started with SMS – the short message service.This was widely adopted in the 1990s and was still quite prevalent before the era of WhatsApp and Facebook Messaging. What it did was it let mobile phones exchange basic 160-character text messages over the mobile network. Straight away jumping to the Android world, in August Google Launched Google Talk (aka Google Chat) a instant messaging service that provided both text and voice Messages. 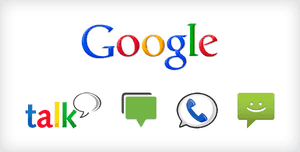 Much happened in the world of messaging,
Firstly in June, Google tries to compete with Facebook by launching a new social networking platform called Google+. This included Hangouts Video Chat
Then in August, Facebook Messenger launches as a standalone app
In October iMessage launches.
This time WhatsApp also was at it peaks reporting a Billion messages a day. In May Google+ Hangouts launches, merging other Google messaging and video chat apps. September marks the integration of Google Voice into Hangouts.

This was a big year for Google.
In January, Google Messenger becomes the preferred SMS app on Android.
In May, Google launches Allo, a texting app, and Duo, a video chat app.
Finally in June 2016, Google Talk for Android and Google Chat in Gmail discontinued. In February, Messenger is renamed Android Messages, announced it will be the default RCS app.
In March, Google announces Hangouts is becoming Hangouts Chat, focused on enterprise use.

Finally in April, Google had paused its investment in Allo, focusing instead on Chat, a new standard to replace SMS

Now what Google wants is Chat to become a Universal Standard. It wants Chat to work same everywhere in every phone device. For this complicated messaging app, it had to corral more than 50 carriers and nearly a dozen manufacturers so that they accept this standard and this would be happening in the coming years.

Unlike WhatsApp’s end to end encryption, the Chat by Google won’t be end-to-end encrypted.

Also one can expect a desktop version of Chat to work on a computer. iMessage too works on both mobile and desktop computers.